Some books are better the second time around.  Even better the third, after 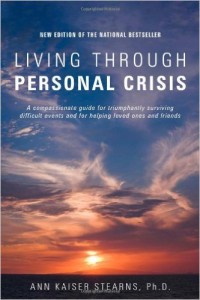 life has delivered its lessons. Living Through Personal Crisis by Ann Kaiser Stearns is such a book.

Its subject is grief over life’s losses, big and small. A painful divorce propelled the author, a clinical psychologist, chaplain, and professor, to write it. She had two purposes: to help others and to heal herself.

In a video on her website, and in the Preface to her revised version, Dr. Stearns says resilience comes when we learn from our pain. When we find meaning in it.  We redeem our own suffering by using it to help someone else. And that makes us stronger.

Soon after my husband died in October of 2015, I spied Living Through Personal Crisis on a shelf in his office.  I was startled to see it because I’d just put down a condolence letter that mentioned it. Jerry’s former colleague, a fellow retired Secret Service Agent, said that when his 14-year-old son died in 1984 Jerry had sent him this book. It had been a lifeline to him and his wife and for many others to whom they had given it over the past thirty-plus years.

So when I found it just sitting there, I thought, This is a message. I’m supposed to read this book. Right then I sat down and re-read the slim but profound volume, cover to cover.

I’d read it in the ’80s because Jerry knew the author. He was pursuing a post-retirement Master’s degree in Pastoral Counseling, and Ann Kaiser Stearns was one of his favorite teachers. Her book was the fruit of her own painful divorce. With Jerry’s death so fresh, I read it again to see if I was losing my mind. She described what I was already feeling: disturbed sleep, anxiety about the future, a sharper sense of vulnerability, survivor guilt.  Check, check, and check.

I also read it to learn what to expect: six months to a year to heal. Sudden, surprising waves of anguish. The struggle to recreate my life: transitions, integration. Advice to defer big decisions while I slog through the inner work.  The stuff I’m living into now, months after Jerry’s death. Dr. Stearns nailed it.

My copy was a yellowing paperback. Could it still be in print? Yes! Not only in print, but in many versions, including seven languages. It’s a quiet best-seller, thanks to a recommendation by Ann Landers years ago and continuing word of mouth, as people in pain pass it on. I’ve already given away two copies and recommended it to my social worker for a retreat he was leading.

So now I’m reading it for the third time.  Not straight through this time, but in small bites to chew on as I move out of the fog.  I’m using it to honor Jerry and to redeem the pain, for myself and others.