Imagine sitting in a noisy restaurant, barely able to discern beautiful music filtering through the din. Or imagine a 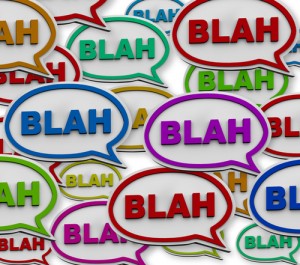 strainer with a large mesh basket filled with stuff blocking it so that only the tiniest bit of liquid is allowed to drain out.

That’s what it’s like in some mediations I conduct. A lot of noise – noise that’s important to the persons explaining their interests and what they’d like to see come out of the process. But it’s noise just the same. Accompanying their words are the drama, the pitch of the contending voices, the marshaling of facts and assumptions — all aimed at influencing a favorable outcome.

I have no idea how a judge or jury separates the wheat from the chaff or culls the critically important from the clamor and the clutter. Much of it is irrelevant to any legal issue to be decided.

But in mediation I’ve found that distinguishing the silver from the dross is essential for reaching a mutually acceptable outcome. In some cases, however, the dross may be where the solution lies hidden.

I’ve also found that the culture of mediation is quite different from the culture of the courtroom. There’s no need to dramatize the facts; hyperbole is useless, citing past performance or lack of it is, at best, marginal.

What are the keys to a successful outcome?

Outside of mediation as well, it seems that it’s important to distinguish the music from the noise. What are people ACTUALLY saying? What are they leaving unsaid? How can just a word or two clear things up or muddy the waters?

What I find it requires from me is heightened consciousness — finding a zone that’s impervious to all but what’s really meaningful. Getting there is not so hard, but staying there as the noise expands is the challenge.

© Sig Cohen and Beyond Dispute Associates, 2015. Unauthorized use and/or duplication of this material without express and written permission from this blog’s author and/or owner is strictly prohibited. Excerpts and links may be used, provided that full and clear credit is given to Sig Cohen and Beyond Dispute Associates with appropriate and specific direction to the original content.