In May 2017 my wife and I visited Portland, Oregon, for a week. We had a wonderful time. There’s plenty to do. The weather was awesome. Our hotel was top-notch. Everything clicked.

Our first evening there we saw a play. The theater is in a building that houses several art galleries. One is called “The Geezer Gallery.” After years of writing about ageism and the need for us older Americans to face life squarely and with self-respect, I was honestly appalled that an organization could call itself that. (My online dictionary defines geezer as an odd or eccentric man, usually an elderly person). 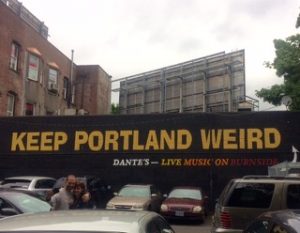 I checked the Gallery’s website and learned that it is devoted to celebrating Master Level senior artists, providing “art as therapy” programs, and giving voice through art to seniors in our community.” I even called the gallery and learned that its founders initially didn’t know what to call it. So, they sequestered twelve artists (four teens, four mid-lifer’s, and four seniors) in a room. They had to remain there until they agreed on a name. ‘Geezer Gallery’ was their key to freedom.

The next day my wife and I used the Trolley. Portland operates marvelous trolleys that travel the length of the city. As in most cities seniors get a break on fares. But unlike other cities we’re not ‘seniors.’ We’re ‘Honored Citizens.’ How validating and dignified is that?

Isn’t that proof Portland’s weird? Apparently Portlanders take pride in their weird-ness. We even took photos of a giant billboard proclaiming: “KEEP PORTLAND WEIRD.” On one hand an art gallery featuring seniors’ works calls itself Geezer. But on the trolleys we’re ‘honored citizens.’

What a metaphor for how much of society views aging. We’re either odd and a bit cranky or treated with respect and dignity. It also (in my opinion) reflects the bipolar way that many us older citizens think about ourselves: We’re either self-deprecating and at the same time self-righteous, or we hold our heads high, proud of what we’ve accomplished, and patient and considerate of others.

As we age, let’s not fall into the trap of self-deprecation nor righteousness. Life’s challenges are becoming more daunting each day. Let’s not complicate things with attitudes that suggest we ARE geezers. Rather let’s honor ourselves…and others as well.