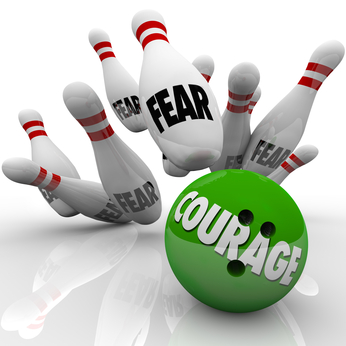 “How would your life change if you could reduce your fear level by just 25%?”

My pastor, Gordon Cosby, challenged me with this question years ago.

I realized I had many unacknowledged fears. I had a powerful job and feared doing anything that might look controversial, so I was afraid to participate in peaceful demonstrations for causes I believed in.

I eventually did all those things, and I became braver. But I still struggle with fear in other areas of my life. There’s always that pesky fear of failing.

Recognizing your fear is a first step, but how do you move toward reducing that fear?

When Eleanor Roosevelt married her cousin Franklin Delano Roosevelt, she was painfully shy and gripped by low self-esteem.

Yet Eleanor’s compassion for the down-and-out drove her to become the voice of the voiceless. In the process, she became one of the world’s most respected women of the 20th century.

How did she do it? Here’s her secret: “Do one thing every day that scares you.”

Do what scares you in stages.

Start with small steps. The first time I participated in a demonstration, I wore a scarf that partially hid my face and I avoided cameras. I would not carry a sign or offer to speak. I stayed in the middle of the marchers. I wanted my presence to count, but I did not want to be seen and identified. I felt very brave when the march was over. I had done it and survived!

I didn’t cover my face the next time.

Maybe you’re afraid of a tough conversation you need to have with a family member or work colleague. You might start with a request: “Could we have lunch one day next week? I’d like to share some thoughts with you and get your views.”

Let’s say you want to approach your sister about sharing the cost of a helper for Mom, but are afraid she’ll resist or even get angry. Start the conversation by describing your concern in non-judgmental language, and ask how your sister sees it. For instance, ”When I visited Mom last week, I noticed dirty dishes all over the kitchen and very little food in the fridge. I’m worried. What do you think might be going on?”

Then you listen. See where the conversation leads. During that first lunch you may or may not get around to the topic of  jointly hiring some help, but you can offer to gather information and meet again. These are small steps that will decrease your fear of the next conversation, increase your knowledge about what’s happening with Mom, and explore your sister’s willingness to help deal with it.

Do what scares you with someone else.

Eons of human experience have shown that we are braver when we are not alone.  There was a reason Jesus sent out his disciples two by two. It’s one reason people get married. We can take greater risks because we know someone has our back. There’s less chance of making an error if I have a companion with whom to talk it over. If one of us is scared, the other may be brave. We can share our knowledge and experience. We inspire one another.

Having a companion also creates accountability. When we commit to try something new, we are more likely to follow through if another is expecting it.

One major benefit of mediation is the simple presence of another person. With a neutral third party in the room, participants feel safer to express what they want and need. And when people feel less afraid they are less defensive and more willing to negotiate, freer to apologize, to make requests, to bring up sensitive topics.

What would you do – what conversations would you have – if you could reduce your fear by only 25%? Start today!